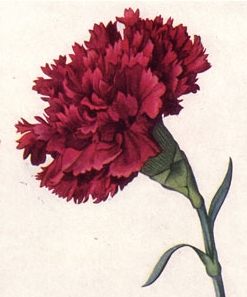 Happy Halloween! In honor of the holiday and the upcoming Day of the Dead, I’m wearing a Not Quite Dearly Departed Perfume, an original formulation of Caron’s fiery carnation, Poivre.  I was about to write that we’ll be getting back to naming perfumes from Coming to My Senses tomorrow, when I realized that Poivre is, in fact, one of the many unnamed perfumes in the book. Here’s the description from Chapter Nine:

Poivre is the fierce grandmama of Golconda, the haute couture carnation from the JAR line, and Caron’s own much softer, sweeter Bellodgia, whose dark base has disappeared since this otherwise still accurate review. When I say “carnation”  I’m not talking about the sad, refrigerated scent of cheap prom corsages. I mean something closer to the Dianthus garden flowers that go by the name of “clove pinks” or “Sweet William,” distant cousins of the lost, lamented, and now on-their-way-to-being-revived Malmaison Carnations that scented the drawing rooms of the Belle Epoque (and Oscar Wilde’s lapel) with a heady mixture of clove, pepper and vanilla.

The key to the glory of vintage Poivre is a big overdose of eugenol, a peppery clove-smelling synthetic material. There is so much in my very old bottle that when I put it on I can taste it as well as smell it. As the perfume unfolds, the peppery phase quiets somewhat and the clove melds with vanilla and rose notes to become much more than the sum of their parts–an operatic, three-dimensional vision of a carnation, real and recognizable, but elevated to the point where it begins to go abstract. In the dry down, the signature dark Caron base, softened by the vanilla, comes forward and the whole thing becomes more comfortable. The opera is over and its time to take your shoes off and have a snifter of cognac by the fire.1

Eugenol has since been restricted by the industry because it is a potential allergen, and the current version of Poivre is sweeter, rosier, less peppery and less dark. It is a very nice perfume, beautiful even, but it takes few risks and compared to its forbear it is not nearly as alive.

Poivre is an urn fragrance, meaning that is is only available from Caron boutiques, where it is decanted from spectacular old-fashioned urns into a bottle of your choice. Last time I checked it was possible to purchase samples by calling the Caron boutique in New York and speaking very sweetly to the sales assistants. For another interesting take on Poivre and its history, please check out this post from vintage perfume maven, Yesterday’s Perfume.

1 Someday I will live in a world where “snifter” sounds like a perfectly reasonable word and not something I borrowed from a Masterpiece Theatre episode.