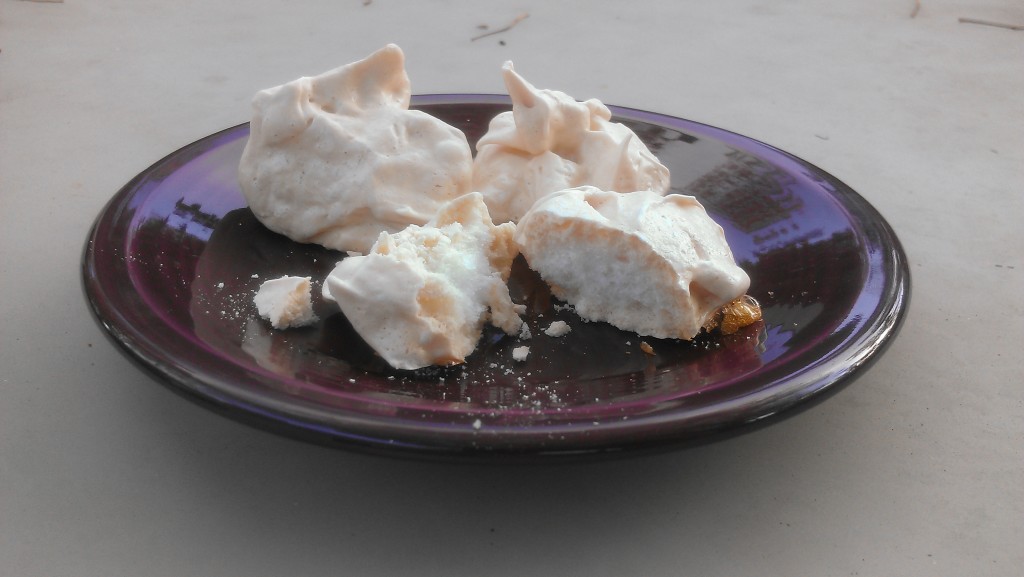 I’m feeling thankful for so much this season. High up on that long list are all the kind, intelligent readers out there who’ve sent me emails, tweets, Facebook messages and actual real-life letters or just dropped by the blog to hang out for awhile, and all the other readers I haven’t heard from and never will but who I know are out there anyway. I never thought my life would look like it does right now, and it wouldn’t without you. Thank you.

So, I wanted to make you a couple of drinks tonight–two creme de violette cocktails, sparkles and velvet. I had it all planned. I would get up early in the morning and work on my Friday post about the Art of Scent exhibit and the surrounding “Is perfume art?” brouhaha, and then I would take a break and make the drinks. I already knew what was in them, I just needed to figure out the exact measurements so I’m not giving you directions like “a third a glass of bourbon and the same of black tea” (what kind of glass?) or “a skoche of gin–just enough to make it a bit drier” (what exactly is a skoche anyway?). 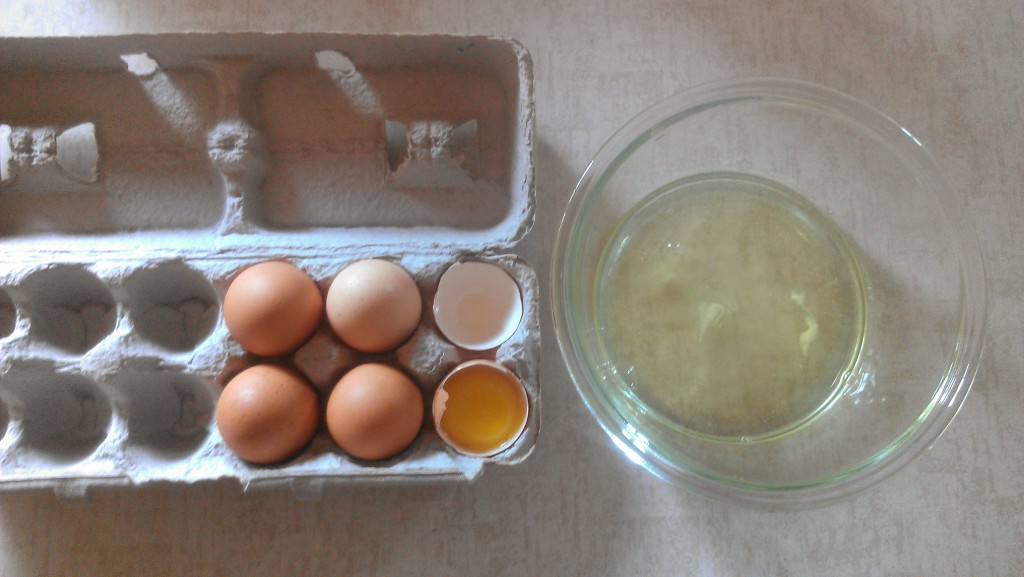 Instead I wrote and wrote and wrote and stared into space and wandered around, and then I deleted a lot of what I’d written and wrote some more. That’s how it goes sometimes. I realized, at around 3:00 in the afternoon, that if I made those drinks I would write no more. Also, that it made no sense to make cocktails for myself, alone at home, when tomorrow I’ll be hanging out with a big group of people who can test them for me and drink up my entire bottle of champagne. But I was tired of writing. I was in a holiday mood. So I made you some meringues. Meringues Violette.

Please don’t pay any attention to recipes that make meringues sound difficult. I learned to make them when I was eight years old from a beautiful black-eyed divorcée who lived across the street in her excitingly messy house with her wicked, black-eyed eight-year-old daughter. They were from New Orleans, and a little bit French, and when I spent the night we made meringues. She called them Kisses and they came out perfectly every time. 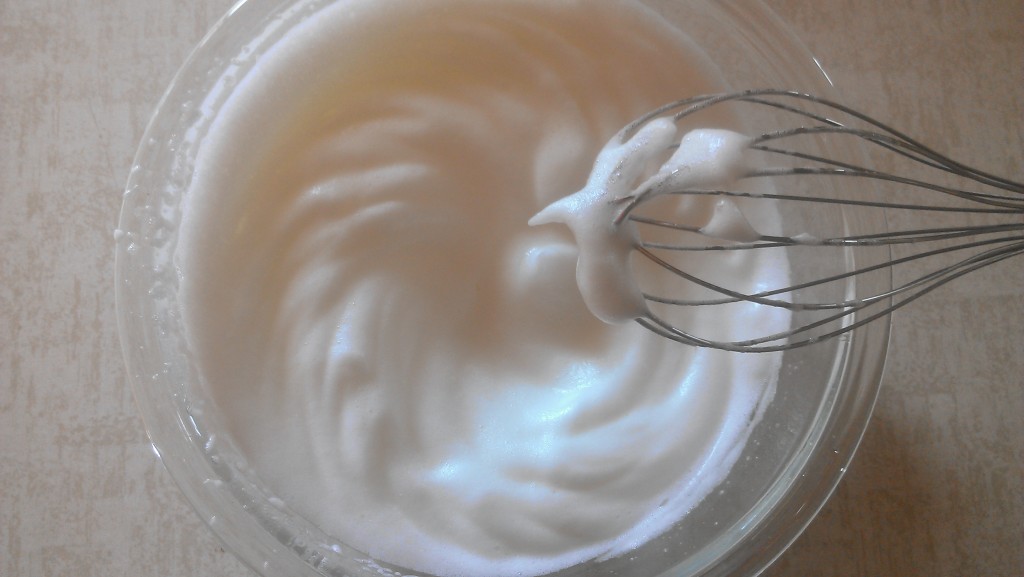 This is why I know you can make meringues in your sleep, or in your bathrobe after a long day with two small, impatient girls standing nearby. The eggs do not need to be a certain temperature. You do not need Cream of Tartar. The meringues do not need to dry out in your oven all night. You do not even need parchment paper, though if you have some now is your chance to dig it out of the drawer. (You can cut up a brown paper bag to use instead if you don’t.) You just need egg whites, sugar and, to make things interesting, a flavoring.

Begin by preheating the oven to 250 degrees. Then separate three whites from their yolks. I do this by pouring the yolk back and forth between two halves of shell and letting the whites drip down into a bowl. (You can save the yolks for a custard, a sauce or homemade mayonnaise if you’re so inclined. ) Then beat the whites. As they froth and gain volume the bubbles will grow finer and finer until they begin to look smooth and form soft peaks, as in the photo above. Then add half a cup sugar, scattering it lightly over the whites while beating. The whites will get shiny and and the peaks will get stiff. Like this: 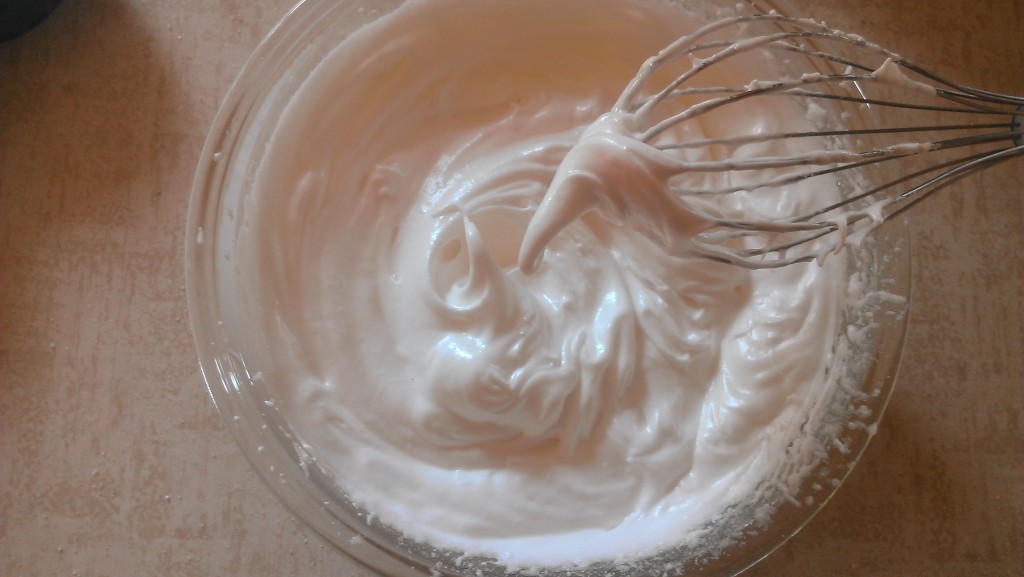 Now it’s time for the flavoring. You want something that will appear and disappear in your mouth, a little wisp of a presence. The divorcée used mint extract. I have used good vanilla paste, rum and Frangelica. Today I used creme de violette. One tablespoonful. Drizzle it over the whites while beating just as you scattered the sugar. Don’t beat any longer than you have to, though. You already have your whites just where you want them. 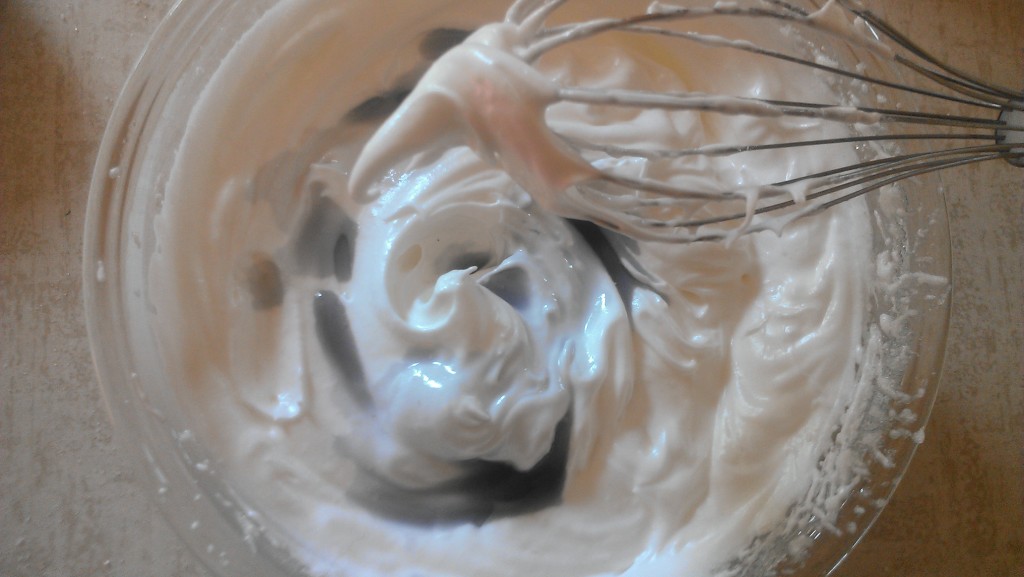 My camera refused to record the vibrant deep purple of the creme de violette. You’ll have to trust me on that. I was hoping the liqueur would tint the whites a pale lavender. Instead they became a very, very pale pink. Probably unnoticeable, unless you were looking and hoping for it.

Now spoon the whites onto a cookie sheet covered with parchment or brown paper. The divorcée liked hers to look like perfect chocolate kisses. I prefer mine free form. You can make them any size you want. The smaller they are, the faster they will be ready to eat. The bigger they are, the less work you have to do. 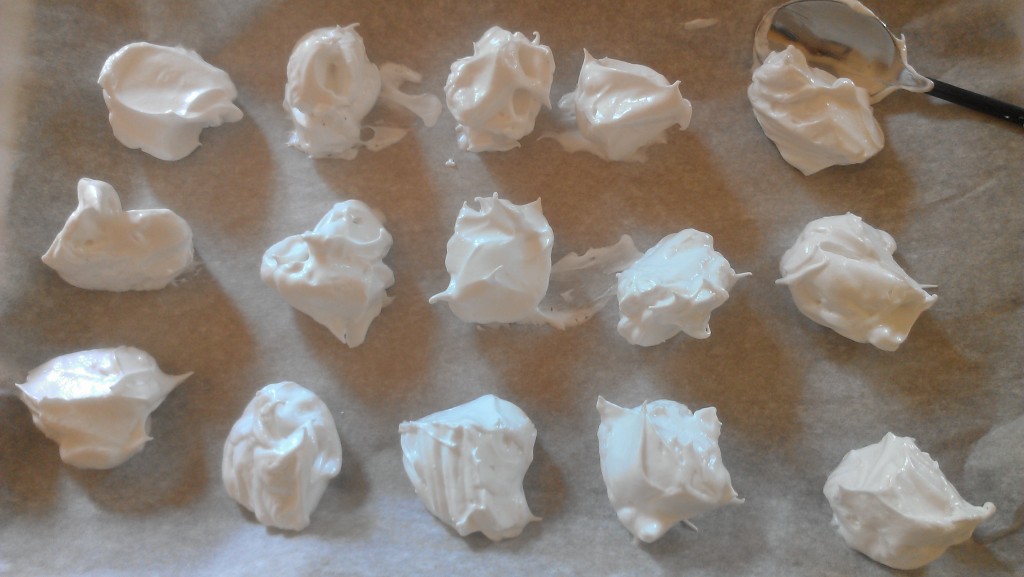 Reduce oven heat to 230 degrees, turn on oven light, and place tray on middle rack. Allow to dry (they aren’t really “cooking” so much as drying) for approximately 90 minutes to two hours. The time will depend on your altitude, your eggs, your humidity and quite possibly the mood of any nearby cats. When the meringues are done they will be smooth and dry to touch and you’ll be able to lift them up easily off the tray. 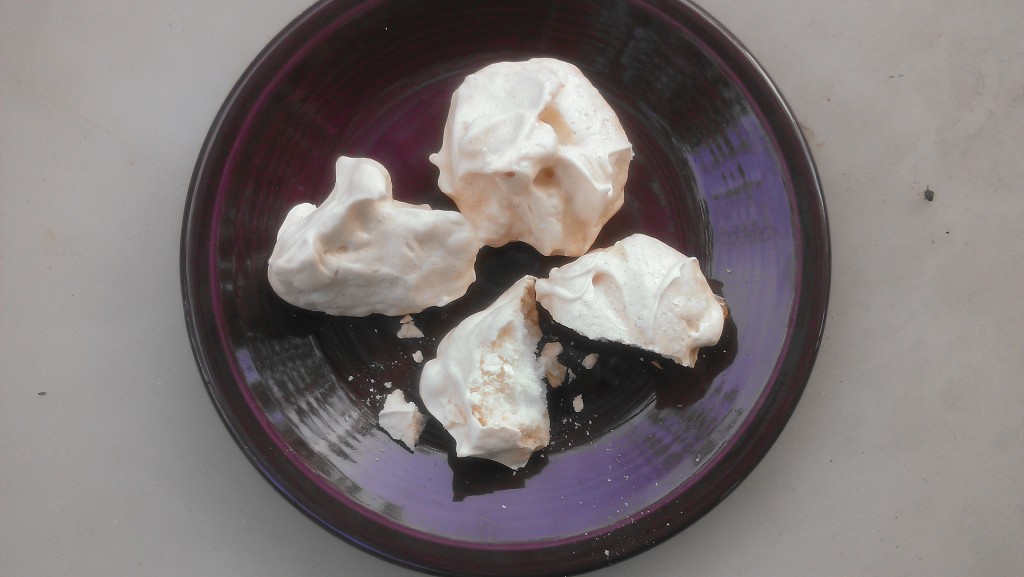 Eat one to test. It should crunch and then melt away on your tongue, a sweet nothing of sugar, texture and violets.  If it’s still a little soft in the middle, don’t worry. It will crisp up as it cools. You can make yourself a cup of tea or coffee while you’re waiting for that to happen.

Happy Thanksgiving to all my U.S. friends and Bon Appetit to everyone!  I’ll see you all on Friday.

Images: All by me with my phone again. I don’t know why you’d want to use these but feel free if you do, just credit and link.