Sweetgrass and the Scent of Rain 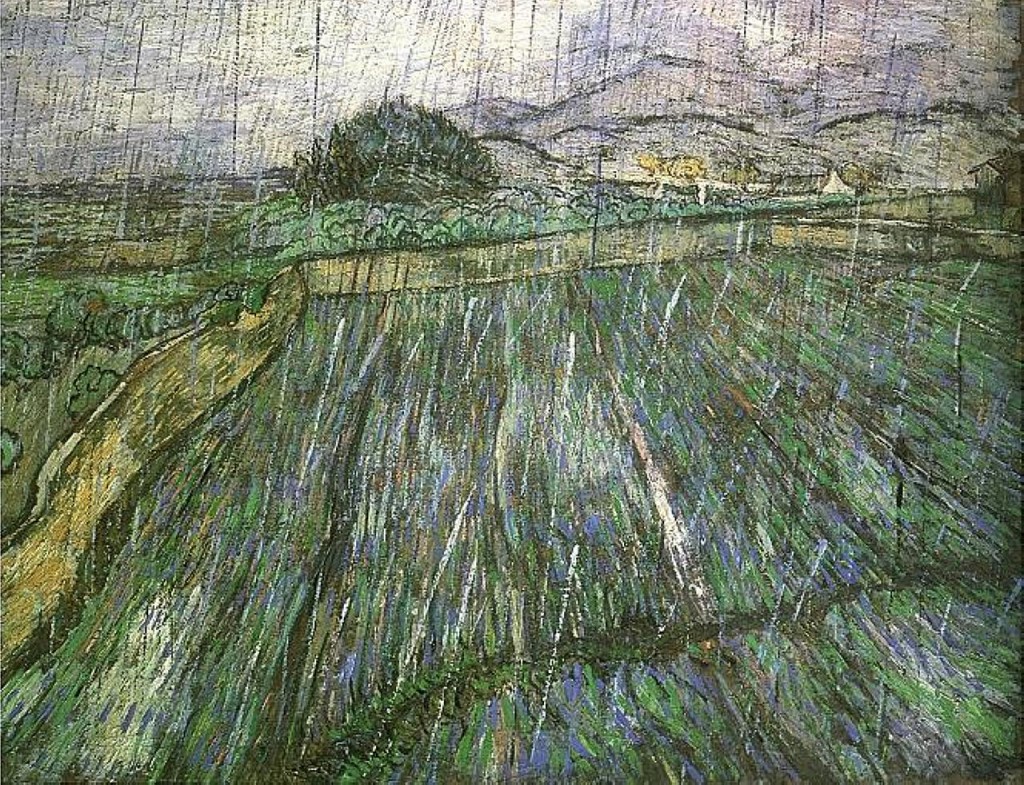 When people talk to me about the scents they love, the ones they wish they could carry with them like talismans to ward off the evils of the world, they always talk about rain: Fat drops of summer rain falling on a hot city sidewalk. Thin, gray autumn rain stirring up the scent of fallen leaves. Foggy winter rains, smelling of salt and pine. Spring rains, smelling of cold mud, and then, a few weeks later, smelling of all the new wet green everywhere. Forest rain. Jungle rain. Rain on tomato vines at four in the afternoon…

I can imagine all of these rains and more as I write about them, but my own rain scent, the one that I daydream about without realizing it, is the scent of summer rain on tall blonde grass–and then the scent of the wet grass after the rain, when the sun comes out. I’ve never had any hope of finding that scent in a bottle.  And then a couple of weeks ago I did just that.
END_OF_DOCUMENT_TOKEN_TO_BE_REPLACED

Book Scents: Wind in the Willows 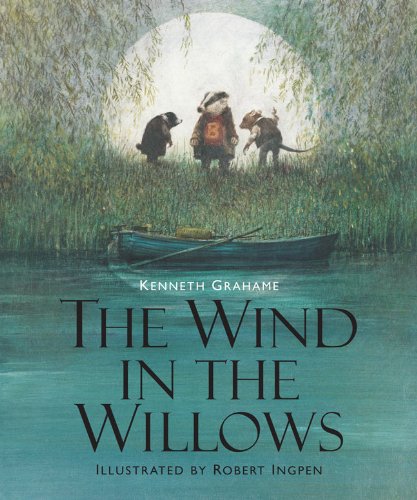 I never loved The Wind in the Willows as a child. My version was abridged in the same way that many children’s copies are–it left out two chapters about Rat and Mole* and put the emphasis squarely on Toad, who baffled and frightened me. This year I picked it up again and I can’t seem to put it down. I still don’t understand Toad’s appeal, but I love Rat and Mole and their friendship with all my heart, and I have a definite crush on Badger, whose varsity sweater (as imagined above by Robert Ingpen) I’d like to borrow and never give back.

What I love best about the book, more than any one character or adventure, is the peculiar yearning sweetness of its tone. It’s a story that’s about longing and restlessness and fear as much as it is about friendship and gentleness. There’s a constant tension in the stories between risk and retreat, adventure and comfort. Toad is on the far end of the risk spectrum, happy-go-lucky, greedy for new experience, chaos personified. Mole is a homebody, worried and nervous, but just as often full of surprise and delight to find himself capable of traveling in a wider world. (And now you know which sort of animal I am most of the time.)

The passage I noticed for the first time today, and want to share with you here, is a moment when Mole is reminded–sharply, poignantly–of the home he leaves behind at the beginning of the book. He and Rat and have been on the road for some time. It’s pitch dark and they are END_OF_DOCUMENT_TOKEN_TO_BE_REPLACED

Smelling is Believing: My Secret Connection at Google 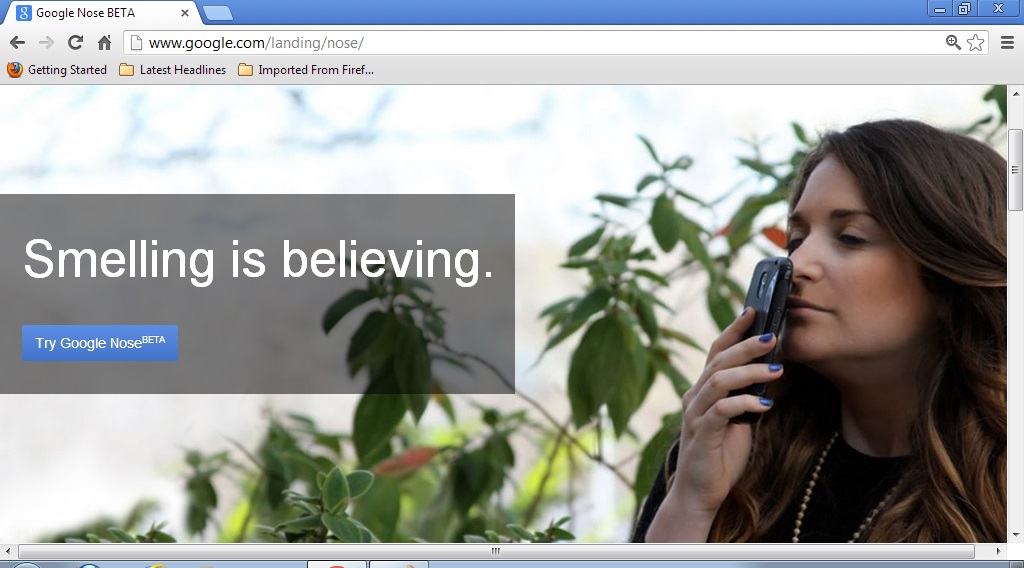 Well, hello there!  I didn’t mean to be gone for so long.  I was having a little trouble with an upcoming post and then I went on a two week social media fast (I needed to stop interrupting myself every five minutes and get some writing done). The blog was supposed to be exempt, but once I was off the internet, I didn’t want to get back on. I enjoy the community here too much to go away forever, but it was good to remember what it was like to be an email-only person, and to hold the possibility in reserve.

Then, just when I needed reminding about the wonders of the internet, my husband sent me a link to Google’s April 1 “release” of “Google Nose” (in Beta, natch).  Those of you who follow the news items over on Now Smell This know that we’ve been hearing rumors about smell enabled smartphones and USB drives for several years now–usually emanating from gadget-obsessed Japan, where a smell app called “Chat Perf” (short for “Perfume” I assume) was released last October–and there are already electronic noses at work sniffing out disease. So it’s a perfect April Fool’s joke–close enough to the truth to be believable but with plenty of room for comedy.

I was enjoying the photo of the woman blissfully sniffing her phone (love the blue nail polish and pearls, too), and then, as I scrolled down the page, giggling over the “People Also Sniffed” section and admiring the perfect description of Wet Dog (“Agressive and foxy with notes of musk and wet towel”) when I noticed something. 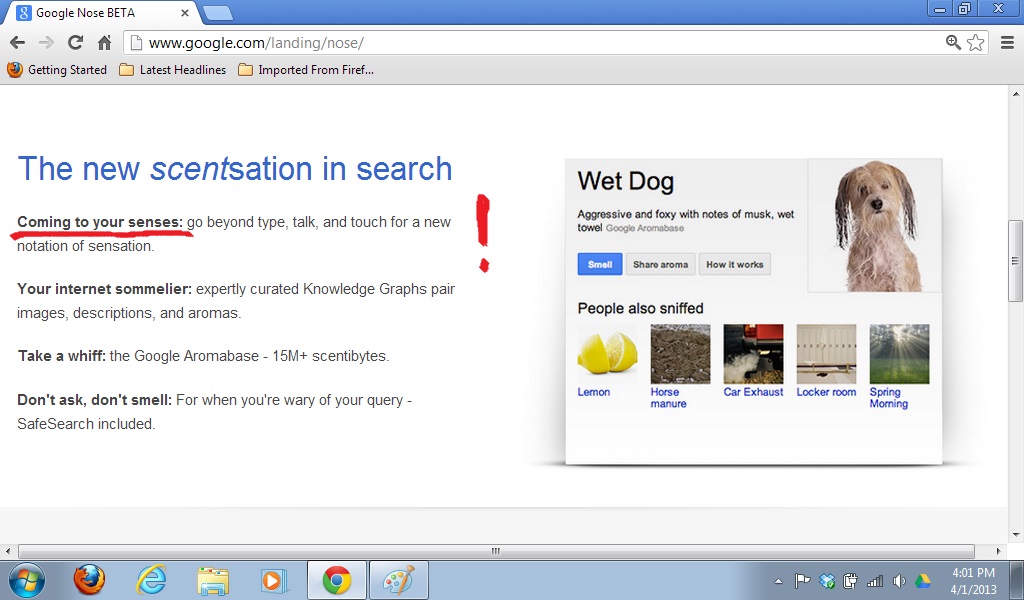 It’s probably just a coincidence. I mean, it has to be right? There couldn’t possibly be a secret perfumista living under deep cover inside the Google hive mind, quietly plotting and planning for the perfect moment when it’s possible to unleash her/his perfume evangelism on the world in the clever form of an April Fool’s joke…someone who likes to read? 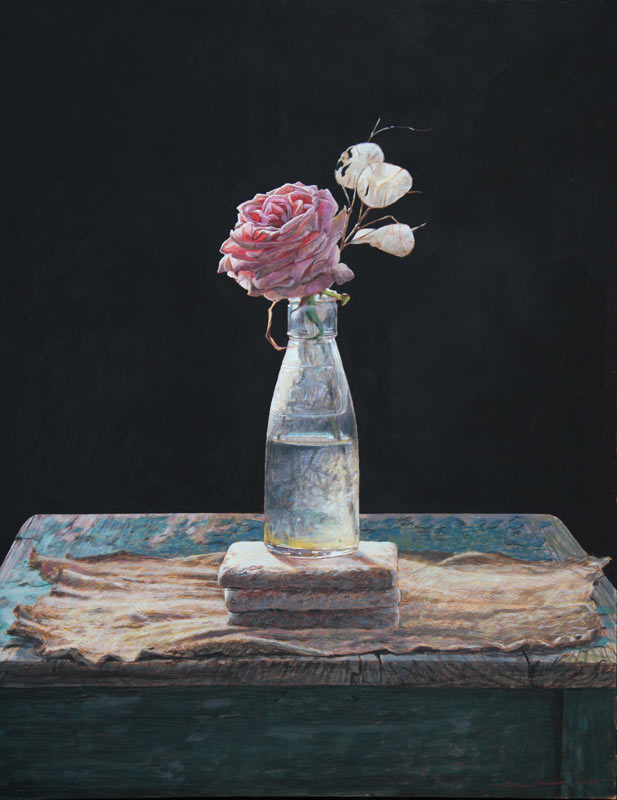 In the fall I crave the scent of roses. I want them dark and full blown, like the true red roses in the heart of Teo Cabanel’s Oha, or roughed up by oud and patchouli like the wonderful/unbearable Black Oud by Montale. When fall turns into winter, I like them jeweled, with a touch of frosty pink pepper, like Ormonde Jayne’s regal Ta’if, or swimming in mulled wine and figs like Parfums DelRae’s delicious, jammy Bois de Paradis, or solemn and rich like Caron’s Parfum Sacre, where the wine and spice comes along with plenty of incense.

But then, after all the feasting and color of the holidays, there comes a moment when richness and ornament feels wrong. END_OF_DOCUMENT_TOKEN_TO_BE_REPLACED

And Now I am in Idaho: A Quick Update and a Couple of Interviews 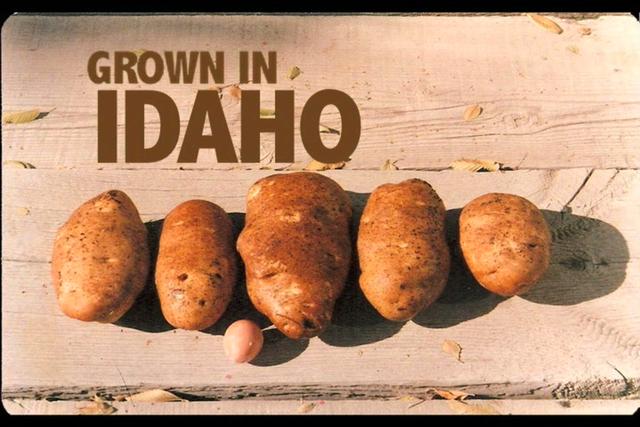 Earlier this week I was in New York finally visiting the Art of Scent exhibit at the Museum of Art and Design. On Tuesday I flew home to Austin, slept for six hours, and then got on a plane to Boise, Idaho where I am now, visiting my parents. This past Friday I was the featured speaker at a fundraiser for the amazing Learning Lab, a nonprofit dedicated to helping children and adults achieve literacy. I can’t imagine my life without reading–my mother tells me that as a toddler  I chewed on cloth books instead of playing with dolls–so I was honored to participate. It was quite an event (840 guests! Including my third grade teacher!).  I’m eager to tell you about it and to write up my thoughts on the Art of Scent exhibit and my recap of the Elements perfume trade show (oh I smelled some lovely things!), but I also want to take advantage of my time here to be with my family, so it may be a few days yet.

In the meantime, here are a couple of interviews I did for Idaho Public Television’s Dialogue, with very smart host, Marcia Franklin, the last time I was here.  The first is about half and hour and includes lots of general conversation about perfume, feminism, reading and writing. The second is a shorter “web extra” in which I attempt to share some perfume (Eau d’Italie’s Paestum Rose, Ginestet’s Botrytis, and a vintage version of Balmain’s Jolie Madame) with Marcia on the air.  After the interviews were over the whole studio staff hung out with me for awhile, sniffing and trying things on. It was great fun.

If you’ve seen these before–they aired over the holidays and were posted on Facebook and Now Smell This but never made it on to the blog–it is well worth checking out the Dialogue site for other author interviews. Ms. Franklin has spoken to quite a range of people, most of them far more interesting than me.